Ephesus was the capital of Asia Minor, a center of land and sea trade, and, along with Alexandria and Antioch in Syria, one of the three most influential cities in the eastern part of the Roman Empire.  From Ephesus goods were shipped to other Mediterranean ports.  This hug city contained a theater (seating about 25,000; Acts 19:29); an agora (“town square” that also served as the marketplace of goods and ideas), public baths, a library, and several temples. 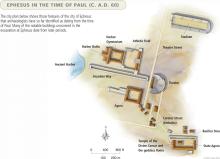 The temple of Artemis, one of the ancient wonders of the world, was in this city, and a major industry was the manufacture of images of this goddess (see Acts 19:21-41).

The congregation had been founded by Aquila and Pricilla (Acts 18:18) and with Sha’ul’s guidance it quickly became an evangelistic center (Acts 19:10).  Timothy later took Sha’ul’s place (1 Timothy 1:3).  Sha’ul ministered in Ephesus for three years and warned that false teachers would come ad try to draw people away from the faith (see Acts 20:29-31).  False teachers did indeed cause problems in the Ephesian church, but the church resisted them, as we can see from Sha’ul’s letter to the Ephesians.  Yochanan spent much of his ministry in this city and knew that they had resisted false teaching.

1 “To the angel of the Messianic Community in Ephesus, write: ‘Here is the message from the one who holds the seven stars in his right hand and walks among the seven gold menorahs: 2 “I know what you have been doing, how hard you have worked, how you have persevered, and how you can’t stand wicked people; so you tested those who call themselves emissaries but aren’t — and you found them to be liars. 3 You are persevering, and you have suffered for my sake without growing weary. 4 But I have this against you: you have lost the love you had at first. 5 Therefore, remember where you were before you fell, turn from this sin, and do what you used to do before. Otherwise, I will come to you and remove your menorah from its place — if you don’t turn from your sin! 6 But you have this in your favor: you hate what the Nicolaitans do — I hate it too. 7 Those who have ears, let them hear what the Spirit is saying to the Messianic communities. To him winning the victory I will give the right to eat from the Tree of Life which is in God’s Gan- ‘Eden.”’ ~ Revelation 2:1-7 (CJB)

In a previous post, we established that “The one who holds the seven stars in his right hand and walks among the seven gold menorahs” is none other than Yeshua Himself.  We also addressed the mystery of the seven stars by stating they represent the angels of the Messianic Communities that we will be addressing in this and continuing posts. Some say that the angels are designated to guard the churches; others say that they are elders or pastors of the local churches. Because the seven letters in chapters 2 and 3 contain reprimands, it is doubtful that these angels are heavenly messengers.  If these are earthly leaders or messengers, they are accountable to God for the churches they represent.  The seven gold menorahs are the communities (churches) to which this and the other six letters are addressed.

I know what you have been doing, how hard you have worked, how you have persevered, and how you can’t stand wicked people.  This church got off to a great start.  Think about having Sha’ul, Timothy, and Yochanan serving as pastors and the kind of church that would have been developed.  Our Lord commends the church for their work, their labor and their patience, which were all the result of love.  Add this, that it was a strong church, which had deep convictions; they knew what was right and what was wrong.

So you tested those who call themselves emissaries but aren’t — and you found them to be liars.  This church openly condemned falsehood wherever they found it, in the world or among their own members!  They were also concerned about those who filled the pulpit!  Visiting ministers were carefully examined by this body of Believers to determine if they were genuine.  They were on their toes in preventing false prophets from leading the congregation astray.

But I have this against you: you have lost the love you had at first.  With all the good that is said about the church, nonetheless, at the most critical point, it failed.  The church lost its affection for Yeshua, for one another and for the lost.  To lose sight of love is to lose sight of everything.

It is possible to be so caught up in church work that we neglect the Savior.  We should never be so busy working for the Kingdom that we lose sight of our devotion to Yeshua.  He wants more than anything else to have sweet fellowship with us and the church at Ephesus forgot that.

First love must be that devotion to Yeshua that so often characterizes the new convert.  This same devotion drives us to share the Besorah.  It is at the point of witnessing that the power (Acts 1:8) of God is upon us.  That love must involve the sharing of our faith with the lost around us.

Therefore, remember where you were before you fell, turn from this sin, and do what you used to do before.  This verse incorporates a threefold admonition.

Otherwise, I will come to you and remove your menorah from its place — if you don’t turn from your sin!  The sad commentary on Ephesus is that it failed to heed the warning and the menorah (a symbol of the light and testimony of Yeshua) was eventually removed.  This should serve as a clear warning to all churches of all ages.  Yeshua said, “Everyone will know that you are my talmidim by the fact that you have love for each other.”  ~ Yochanan 13:35.  No matter what might be said about a church and its accomplishments, if it fails to have a genuine love for Yeshua and one another, it fails totally.

Today, there is no city or church in the Turkish location that was once Ephesus.  Islam has been established in this region that Sha’ul and others had once thoroughly evangelized (Acts 19:10).  How different might the history be had the church continued to practice its first love (Ephesians 1:15)? [2]

But you have this in your favor: you hate what the Nicolaitans do — I hate it too.  With the growing number of false teachers (those who claimed to be apostles and were not), there developed a faulty consensus of leadership.  These false teachers (2 Corinthians 11:13-15) usurped power in a way that was never intended and, eventually, there arose a distinction between clergy and laity.

Nicolaitans were a heretical sect.  Like the prophet, Balaam, they seduced God’s people to participate in idolatry and sexual morality, perhaps disguising antinomian license as freedom in Yeshua (see 1 Corinthians 6:12-20; 8:1-11:1).

Those who have ears, let them hear what the Spirit is saying to the Messianic communities. To him winning the victory I will give the right to eat from the Tree of Life which is in God’s Gan- ‘Eden.  Each of the seven letters closes with a similar challenge: to respond to the instruction is to reflect wisdom beyond measure.  Note the phrase to him winning the victory.  It is important to understand what constitutes conquer or overcomer.  Yochanan previously stated that an overcomer is a person who has accepted Yeshua as his personal Savior.  “Everything which has God as its Father overcomes the world. And this is what victoriously overcomes the world: our trust. Who does overcome the world if not the person who believes that Yeshua is the Son of God?” ~ 1 John 5:4-5 (CJB)

Among Historicist and some Futurists, Ephesus  is said to represent the condition of the church of the apostolic age until the end of the first century of the Common Era (CE).

In my next post, we will look at the letter to the Messianic Community in Smyrna.

[3] Material in this section is taken from “Revelation: Four Views, Revised & Updated” by Steve Gregg

A Blog by Rainer Bantau

A Backyard Garden Is A Perfect Place For Chickens