I’m taking a break from my series on the Book of Revelation on this special day to share my thoughts about Resurrection Day.  I’m not going to get into the controversy over the use of the name Easter other than to say it has only secular significance to me.  Cute bunnies hopping around laying colored eggs and delivering chocolates to the children pales in comparison to what we should be focusing on.  There Is More Than the Cross … There Is An Empty Tomb!

As Max Lucado writes: “On the eve of the cross, Jesus made His decision.  He would rather go to hell for you than to go to heaven without you.”  [1] That decision would only be validated if He truly rose from the dead. 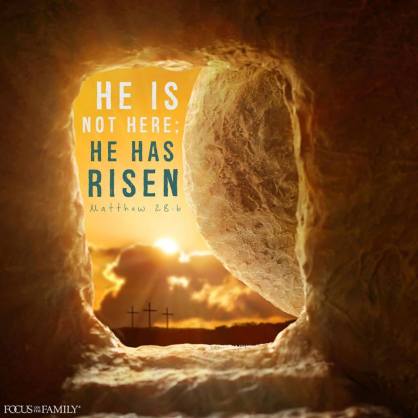 As far back as I can remember, every Resurrection Day we would go to church and joyously sing out:

We were there to celebrate that Yeshua had paid the price for our transgressions, just as Isaiah had prophesied.  “But he was wounded because of our crimes, crushed because of our sins; the disciplining that makes us whole fell on him, and by his bruises we are healed.  We all, like sheep, went astray; we turned, each one, to his own way; yet Adonai laid on him the guilt of all of us.” ~ Isaiah 53:5-6 (CJB)

Perhaps, Job has one of the oldest references. “But I know that my Redeemer lives, that in the end he will rise on the dust; so that after my skin has been thus destroyed, then even without my flesh, I will see God.  I will see him for myself, my eyes, not someone else’s, will behold him.  My heart grows weak inside me!” ~ Job 19:25-27 (CJB).  When the book of Job was written, Israel did not have a well-developed doctrine of the resurrection. Although Job struggled with the idea that God was presently against him, he firmly believed that in the end God would be on his side.

Daniel writes: “Many of those sleeping in the dust of the earth will awaken, some to everlasting life and some to everlasting shame and abhorrence … But you, go your way until the end comes. Then you will rest and rise for your reward, at the end of days.” ~ Daniel 12:2, 12 (CJB)

On the other hand, the Brit Hadashah has much to say about the resurrection.  Just a short sampling would include:

Yeshua said: “How blessed you will be that they have nothing with which to repay you! For you will be repaid at the resurrection of the righteous.” Luke 14:14 (CJB) “And as for whether the dead are resurrected, haven’t you read what God said to you, ‘I am the God of Avraham, the God of Yitz’chak and the God of Ya‘akov’?  He is God not of the dead but of the living!” ~ Matthew 22:31-32 (CJB) “In this age, men and women marry; but those judged worthy of the age to come, and of resurrection from the dead, do not get married, because they can no longer die. Being children of the Resurrection, they are like angels; indeed, they are children of God” ~ Luke 20:34-36 (CJB).  And my favorite quote, “I AM the Resurrection and the Life!  Whoever puts his trust in me will live, even if he dies; and everyone living and trusting in me will never die. Do you believe this?” ~ John 11:25-26 (CJB)

Rabbi Sha’ul wrote extensively about the resurrection.  I would refer you to 1 Corinthians 15 for your own study.  One of my personal favorite passage is: “But the fact is that the Messiah has been raised from the dead, the firstfruits of those who have died.  For since death came through a man, also the resurrection of the dead has come through a man. For just as in connection with Adam all die, so in connection with the Messiah all will be made alive” ~ 1 Corinthians 15:20-22 (CJB).

In one of my recent morning devotionals, A. W. Tozer asked the question what is the “Worth of a Soul?” [2]  As in our secular world, the worth of anything is determined by what you are willing to pay for it.  In our case, Yeshua HaMashiach paid the ultimate price to redeem our souls ~ He gave Himself for us in His death and sacrifice.  That’s why it is so important to give Him thanks and praise for what He has done for us.

As time went on, I discovered a new worship song that was equally appropriate for Resurrection Day. 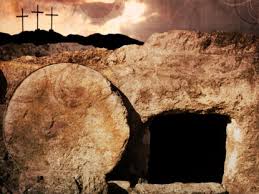 In my next post, we will return to our series by beginning to look at Revelation 7.

2 thoughts on “There Is More Than the Cross…”

When ordinary people put their faith in the Extraordinary God, mountains move.

“With this news strengthen those who have tired hands, encourage those with weak knees,say to those with fearful hearts “be strong & do not fear” Isaiah 35:3