In my last post, we finished the first half of the Olivet Discourse contained in Matthew 24.  In this post, we will begin to unpack Matthew 25 as we wrap-up Yeshua’s teachings in the Christian Torah.

Yeshua told three more parables to clarify further what it means to be spiritually vigilant ~ ready for His return and how to live until He comes. The ten bridesmaids (Matthew 25:1-13) teach that every person is responsible for his or her own spiritual condition.  The story of the talents (25:14-30) shows the necessity of using well what God has entrusted to us.  The parable of the sheep and goats (25:31-46) stresses the importance of serving others in need.  No parable by itself completely describes our preparation.  Instead, each presents one part of the whole picture.

The Parable of the Ten Bridesmaids 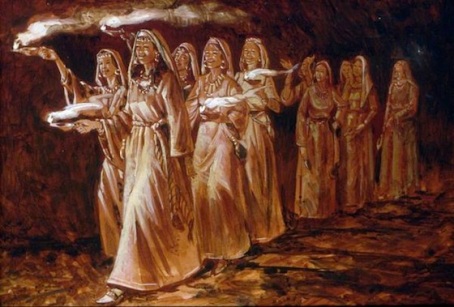 “The Kingdom of Heaven at that time will be like ten bridesmaids [or virgins] who took their lamps and went out to meet the groom.  Five of them were foolish and five were sensible.  The foolish ones took lamps with them but no oil, whereas the others took flasks of oil with their lamps.  Now the bridegroom was late, so they all went to sleep.  It was the middle of the night when the cry rang out, ‘The bridegroom is here! Go out to meet him!’  The girls all woke up and prepared their lamps for lighting.  The foolish ones said to the sensible ones, ‘Give us some of your oil, because our lamps are going out.’  ‘No,’ they replied, ‘there may not be enough for both you and us. Go to the oil dealers and buy some for yourselves.’  But as they were going off to buy, the bridegroom came. Those who were ready went with him to the wedding feast, and the door was shut.  Later, the other bridesmaids came. ‘Sir! Sir!’ they cried, ‘Let us in!’  But he answered, ‘Indeed! I tell you, I don’t know you!’  So stay alert, because you know neither the day nor the hour.” ~ Matthew 25:1-13

This parable about a wedding describes the need for readiness for the Kingdom and explains that some will be included while others will not.  Wedding customs differed from village to village in ancient Israel, but all weddings included the processional of the bridegroom to the bride’s family home.  A common Jewish marriage custom was for the groom and his friends to leave his home and proceed to the home of the bride, where the marriage ceremony was conducted, often at night. After this, the entire wedding party returned to the groom’s home for a celebratory banquet.  The wedding day would be spent in dancing and celebrating, concluding with the wedding feast at dusk.  The bride would be accompanied with torches to the bridegroom’s house for this feast.  These ten bridesmaids (also called virgins because they were unmarried) were going out to meet the bridegroom, who was coming to the bride’s home to join the procession back to his house for the wedding banquet. This happened after dark, and in villages and towns without streetlights, these torches wrapped in cloth soaked in oil, lit the way (the Greek word translated lamps means torches, not lanterns). Everyone was required to carry his or her own lamp; those who didn’t have one were considered party crashers – those who had not been invited.

The foolish bridesmaids (representing non-Believers) were unprepared; they took lamps with them but no oil.  If their lamps burned out, they would be unable to light them again.  The sensible bridesmaids (representing Believers) had brought along flasks of oil, so they were prepared to relight their lamps if necessary.  As with any parable, the details ought not to be pressed.  For example, that there were five sensible bridesmaids and five foolish ones does not mean that half the world will be saved.  The parable simply establishes two categories, for there will be only two – those who believe and receive the King, and those who do not.

Since the bridegroom (representing Yeshua) was delayed, the bridesmaids all went to sleep.  Again this need not be taken as an allegory; their sleep was not condemned, because both the wise and the foolish slept. Sleep simply illustrates the long time they waited for the bridegroom.  The second coming of Yeshua will be delayed, as Yeshua has already alluded to many times.  It will be a longer wait than anyone (especially Yeshua’s first disciples) expected.  The difference was that one group had made preparations early; the other group waited until the last minute, and then it was too late.  Finally, in the middle of the night, the bridegroom arrived.  Everyone woke up and prepared their lamps for lighting in anticipation of the procession.

The foolish bridesmaids realized that their torches were burning low (going out) and that they would need more oil to raise the flame higher.  But the sensible bridesmaids explained that they didn’t have enough to share.  This was not selfishness, but rather the realization that if they shared their little oil, then all the torches would burn low and there would not be enough light for the wedding procession.  They needed all their oil to make their torches burn brightly enough.

The suggestion to go to the dealers and buy some at midnight was not that unusual. A wedding procession, especially in the small villages of Israel, might cause the whole town to be up and about.  The foolish women were able to buy oil at this late hour.  However, Yeshua’s focus was on their unpreparedness and on engaging in secular pursuits at the moment of spiritual need.  When Yeshua returns to take His people to heaven, we must be ready.  Spiritual preparation cannot be bought or borrowed at the last minute. No one can rely on anyone else. Our relationship with God must be our own.

The central focus of the parable lies in the words and the door was shut. Yeshua’s point again is that to not be ready at the right time means to miss out completely. Yeshua explained, Later, the other bridesmaids came. ‘Sir! Sir!’ they cried, ‘Let us in!’  But he answered, ‘Indeed! I tell you, I don’t know you!’  There is a finality to the shutting of that door. Those outside will not have another chance to be let in. To have been “part of the party” will not be enough. Unless correct preparations are made, some will still lose out.
Yeshua concluded with the application that His true followers must stay alert and be ready because He will return when we least expect it.  God may delay His return longer than we might prefer or expect.  We must be prepared for such a delay ~ counting the cost of discipleship and persevering faithfully until He returns. Those who are unfaithful must realize that neglecting Yeshua’s invitation may lead to irreversible consequences and the time of opportunity to believe may pass.

When God orders the Gates of Heaven sealed, cries from the outside will be as futile as planting corn in the Sahara Desert without irrigation.  Don’t be late. Tell God today that you want to follow Yeshua, to be His talmid, to serve Him with all your energy.  Don’t presume on God’s goodness; embrace it now.

In my next post, we will continue to explore Yeshua’s next parable on using well what He has entrusted to us.

A Blog by Rainer Bantau

A Backyard Garden Is A Perfect Place For Chickens

Wholesome Inspiration for Family, Life and Living - From A Christian Worldview